Cinnamon Coffee Cake – light and fluffy, full of cinnamon flavor, and topped with a cinnamon pecan streusel. It’s the breakfast of your dreams! Suitable for dessert, too!

Christmas is coming in just a few weeks. I’m knee deep in shopping, present buying, cookie making, and attempting to straighten up the house. While I don’t have to menu plan as we generally have Christmas dinner at my in-laws, I do like to make something special for Christmas morning.

The smell of something sweet baking in the oven while the kids tear open their presents and “Ooh” and “Aah” (hopefully) over their latest and greatest toys, while I sip my coffee (or green smoothie), snap a few pics and take it all in – that’s bliss right there, friends.

This Cinnamon Coffee Cake is the perfect holiday breakfast to get the kids to the table before the chaos of the rest of the day begins.

Christmas Is My Favorite

Christmas is my favorite holiday. I start listening to Christmas music before Thanksgiving. I love the pretty lights, the festive sounds, the big beautiful snowflakes (NOT the polar vortex though!), decorating our trees, visiting with friends and family, the parties, the hot chocolate, the cocktails, the kids sitting on Santa’s lap, and watching the kids’ eyes light up when they open a present they really wanted.

Did I mention the scents of the season? The gingerbread, the cinnamon, the chocolate, the cookies, and all things sugary sweet.

Cinnamon Is My Other Favorite

Although I eat it all year long, the smell of cinnamon always reminds me of Christmas. That sweet spice is sprinkled on almost everything this time of year and I’m not complaining. Christmas breakfast should always include something cinnamon-y if you ask me.

Enter this Vegan Cinnamon Coffee Cake with Cinnamon Pecan Streusel. There is cinnamon in the cake and in the streusel. The cake is soft and moist – not dry and crumbly like those store bought versions!. It smells and tastes heavenly!

I don’t usually bake (or cook) with oils. I’m not opposed to them, but since they are 100% fat, I try to use as little as possible. Same goes for white flour and white sugar. I try to sub healthier ingredients as often as possible.

I trialed several different versions of this coffee cake before settling on this one, which does use some coconut oil and a bit of organic cane sugar (which you can swap out for coconut sugar if you really want). I really wanted something light and fluffy and sweet and not something that tasted “healthier.”

I do think this cinnamon coffee cake recipe is healthier than traditional recipes, but it’s definitely a treat. Pair it up with some fresh fruit and don’t feel one bit guilty because, hey, it’s Christmas! 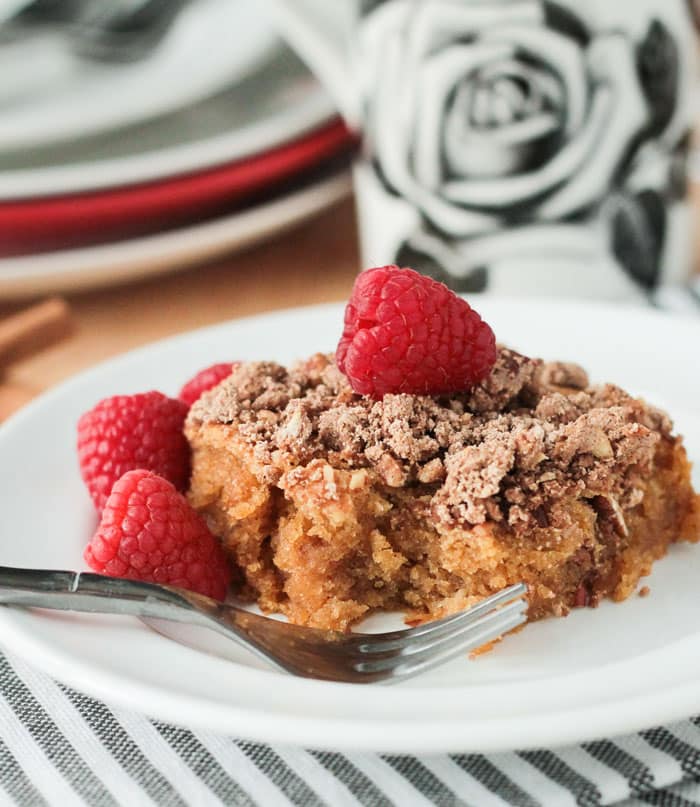 If you don’t have time to whip this up on Christmas morning, no one will blame you! You don’t even have to bake it that morning. It is just as delicious the next day. So make it the day ahead and simply reheat individual pieces in the microwave when you’re ready to eat. Or just eat it cold. It’s great both ways, though I prefer it warm.

And it doubles as a dessert too, so when you’re back from your long day of visiting family and the kids are finally tuckered out and in bed, go grab yourself a piece out of the fridge, warm up for a few seconds, pour yourself a cup of hot tea or hot chocolate and savor the memories of the day.

Did you notice the beautiful white baking dish I made this in? That’s thanks to all of you! My Chai Spiced Pumpkin Layer Cake won Readers Choice in the Simply Organic and Go Dairy Free Bake Off. My prize was a gift card for Revol and I chose this lovely rectangular baker. This was the first dish I baked in it and I love it so much. I love that it has easy to grab handles and it washes clean so easily. I also got a Dutch Oven because they were on sale when I ordered. Score! So, thanks again to everyone who voted!

I hope you love this Cinnamon Coffee Cake as much as we do. If you try it, please come back and leave me a comment below with your feedback and star rating. You can also find me on social media. Be sure to tag @veggie_inspired and #veggieinspired so I’m sure to see it. Enjoy! 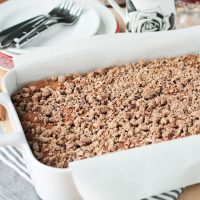 This dish can be made and baked ahead of time. Reheat individual portions for a few seconds in the microwave. 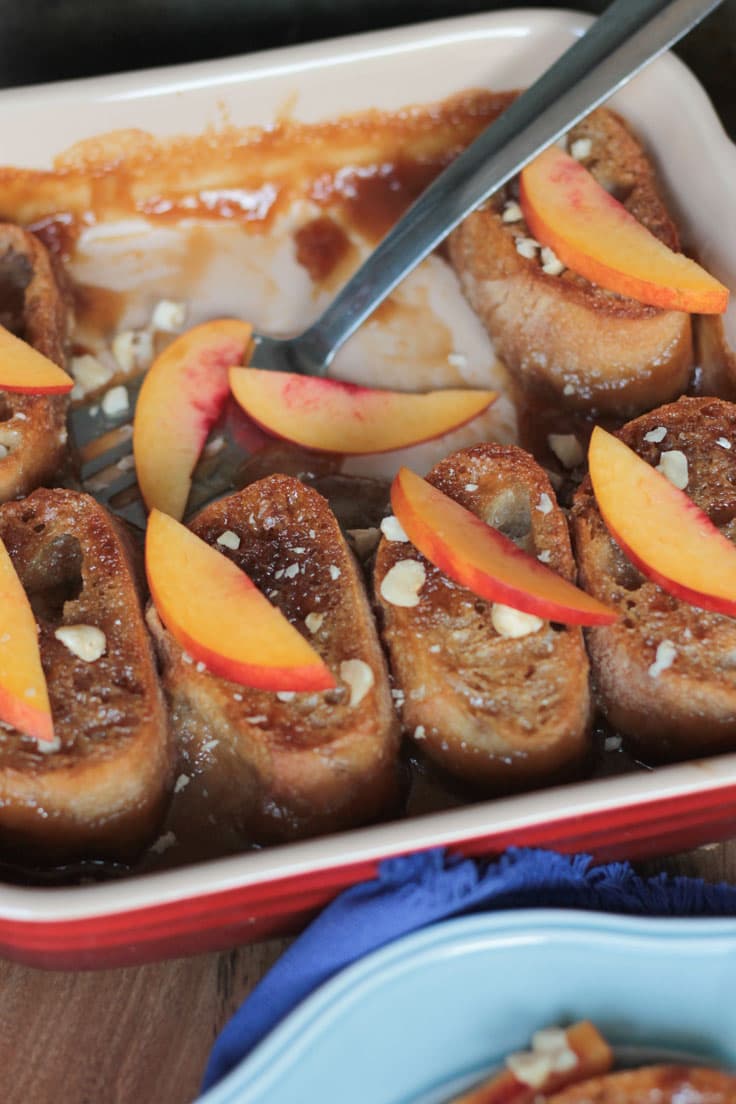 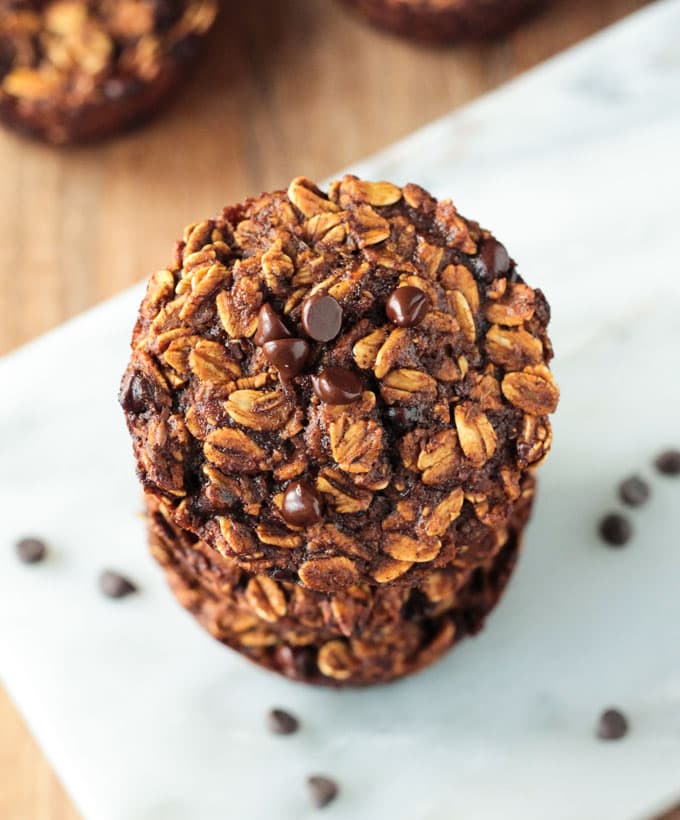